A major goal of fusion energy1 research is to heat and confine an ionized gas (a plasma) of light elements like hydrogen so they fuse into heavier elements, producing significantly more power from fusion reactions than power put into the plasma for heating. While the schemes for achieving this vary widely, a single value tells us how close a fusion experiment is to net power: the fusion triple product. As the name suggests, the triple product is the product of three attributes of a fusion plasma:

The fusion reaction with the lowest (and therefore most achievable) triple product threshold is the fusion of deuterium and tritium (D-T), two isotopes of hydrogen. A fusion power plant running on D-T fuel will have a triple product of about 5×1021 m-3 keV s or greater3. There are of course many other requirements for a commercially viable power plant but the triple product encapsulates a lot of the plasma physics so it's a good place to start the discussion.

A nice property of the triple product is that it’s independent of the particular scheme used to create the fusion plasma so it can be used to compare performance across different kinds of approaches to fusion4. It’s a meaningful quantity in magnetic confinement schemes (tokamaks, stellarators), inertial confinement schemes (laser fusion), and magneto-inertial schemes (MagLIF, compression of FRCs).

Between the 1950s and the early 2000s, the maximum triple product achieved by fusion energy experiments grew dramatically. Then, from the early 2000s to the present there haven't been any new records5 as efforts in fusion concentrate on ITER (Figure 1). It's a remarkable story and it's best to start at the beginning. 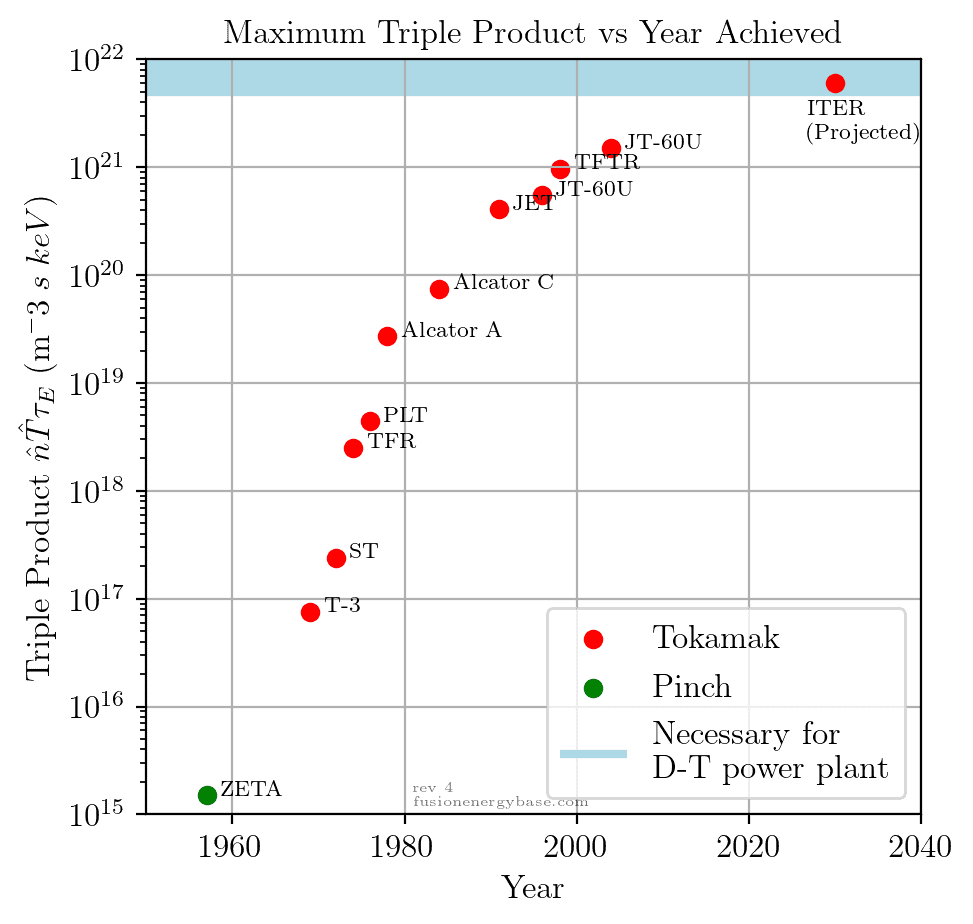 Figure 1: Plot of the increasing maximum achieved triple product and the year achieved. Peak values of ion temperature and density are indicated. The names of each experiment are indicated next to their achieved results. Experimental data from Fusion Energy Base. Projected value of ITER from published models.

During their post WWII optimism of the 1950s, the United States, the Soviet Union, and the United Kingdom mounted well funded, classified efforts to design and build fusion energy systems. A few early experiments initially reported promising results of high temperature plasmas and fusion neutrons, signatures of the D-T fusion reaction. But it was soon realized that this was a misinterpretation of the data. The source of the fusion reactions were areas of instabilities in the plasma, not from a uniformly hot plasma. The actual achieved triple products were very low, far below that required for a power plant. By the end of the 1950s the research was declassified and the field entered into a brief period of pessimism. 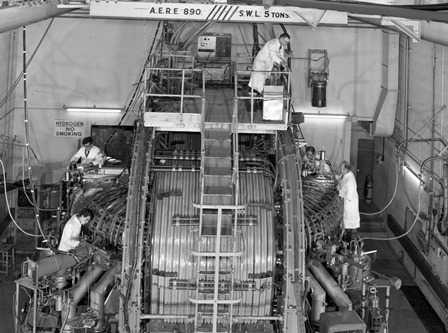 Figure 2: Photograph of the ZETA pinch experiment in the UK from the mid 1950s. Initial optimistic results from ZETA were later walked back. via Swansea University credit NDA (Nuclear Decommissioning Authority)

The outside world was therefore understandably skeptical in 1968 when the Soviet Union reported heating of a plasma to 1 keV (more than ten times hotter than previously achieved) in a toroidal machine dubbed the “tokamak”. In a remarkable example of collaboration during the Cold War, an invited team of British plasma physicists travelled to Russia that fall to measure the plasma temperature with a cutting edge laser system and returned with the news: the report of 1 keV temperatures was true. 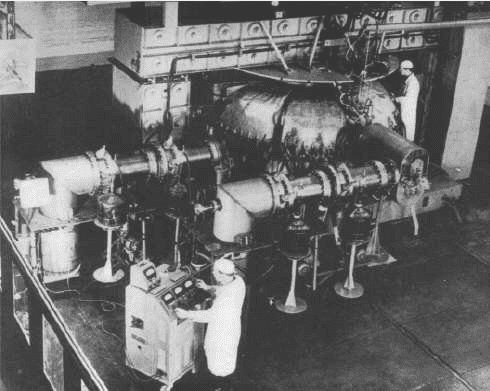 Figure 3: Photograph of the T-3 tokamak in the Soviet Union from the late 1960s. via All-the-world's Tokamaks

A rush of tokamak construction followed, and the achieved triple products climbed rapidly throughout the rest of the 20th century. The ability to drive higher triple products in tokamaks was the result of many advancements in the understanding of plasma physics, improved technologies, and an increase in tokamak size. The increase in size is important: larger tokamaks hold on to heat for a longer time, increasing their energy confinement times and hence their triple products. It also drives up their cost. 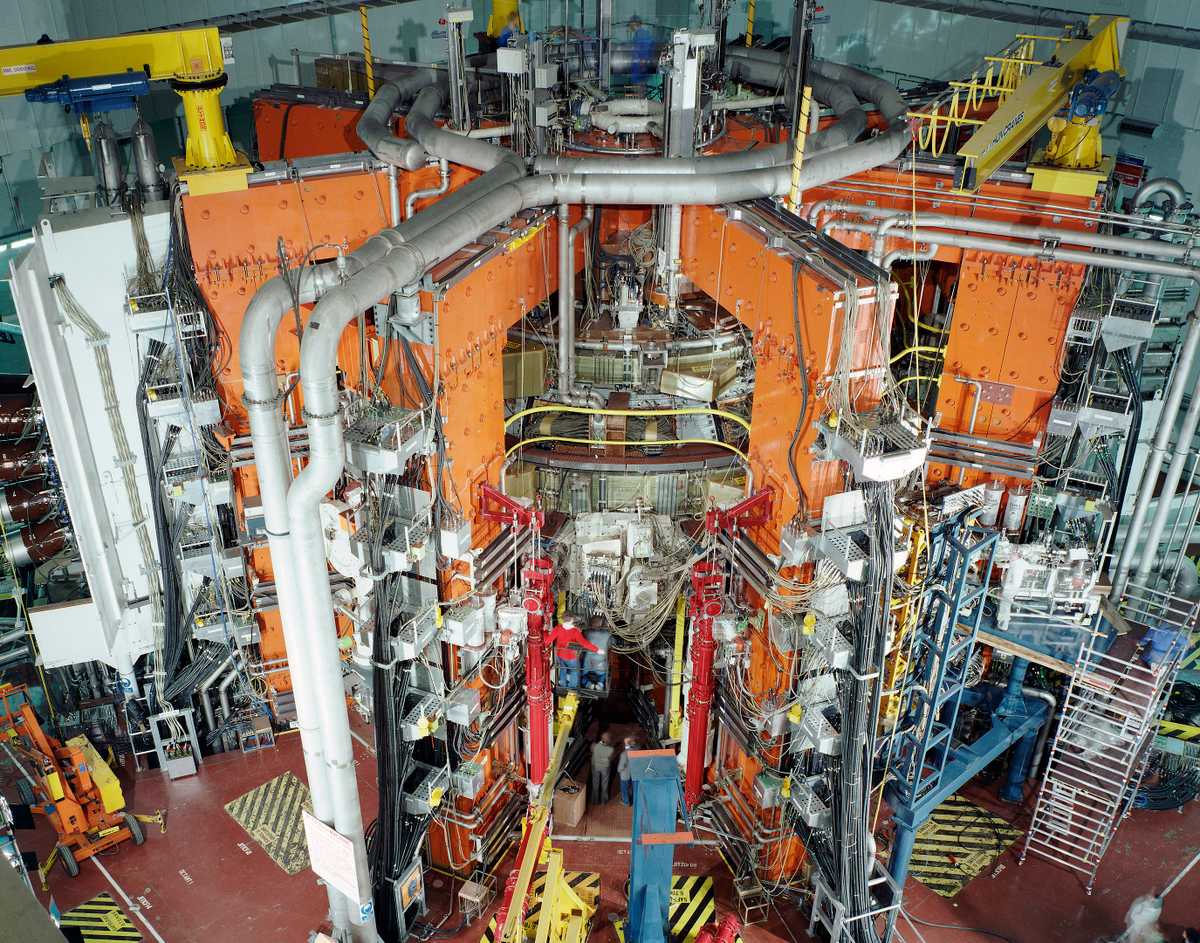 Figure 4: Photograph of the JET tokamak in 1991. Note the person (lower center) in grey for scale. EFDA JET CC BY-SA 3.0

ITER, which will be the world’s largest tokamak when it’s completed, is currently under construction in France. It’s designed to generate ten times more fusion power than heating power injected into the plasma and will likely reach this goal between 2035 to 2040 at a cost of over $25B. ITER is a critically important scientific experiment to understand the physics of plasmas that generate significantly more fusion power than they consume, and to provide a platform for the development of key technologies needed to handle plasmas at those extremes. 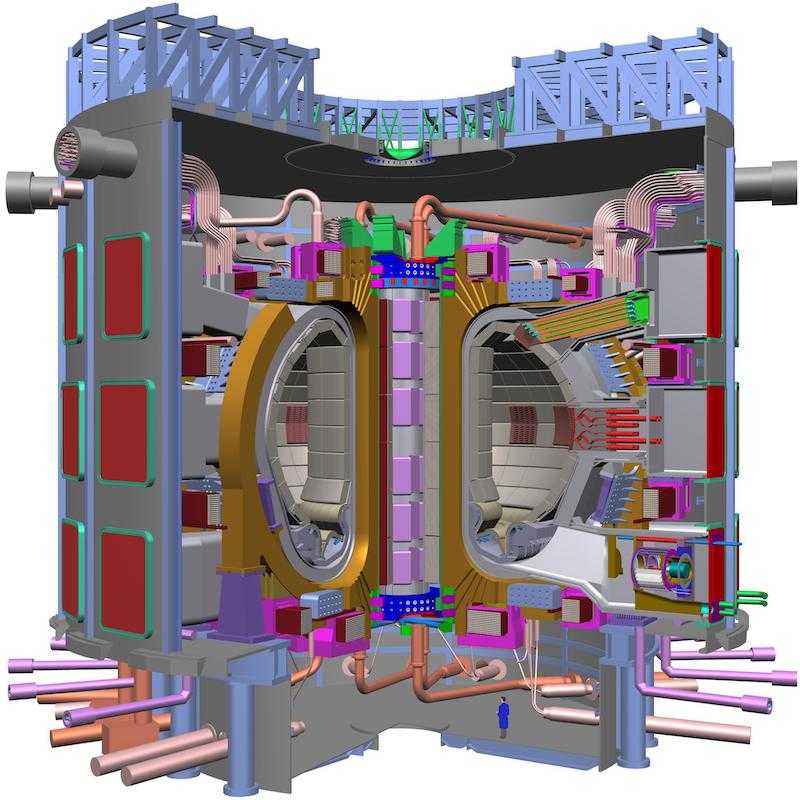 Figure 5: A cutaway illustration of the ITER tokamak. Note the person (lower right) in blue for scale. Credit ITER

But ITER is not the whole story of fusion development today. Work on non tokamak concepts (alternate concepts) and advanced tokamak designs focus on the goal of making fusion energy commercially viable. To understand these efforts we first need to dig deeper into the triple product and look at the plasma temperature which needs to exceed a certain threshold to reach power plant relevant conditions.

Figure 6: The approximate triple product range that is a necessary (but not sufficent) condition for a fusion power plant running on D-T fuel as a function of temperature.

Because of this temperature requirement, effective plasma heating is an important milestone for any fusion energy scheme and explains why the 1keV temperature7 result of the T-3 tokamak generated so much excitement in 1968: while 1keV is too low for a power plant, it’s within a factor of ten of what's required. Even now, combined with a reasonable scheme for plasma confinement, a temperature of 1keV is an exciting milestone8.

By plotting the achieved triple product vs achieved temperature we can get a sense of the progress of fusion experiments along both axes (Figure 4). 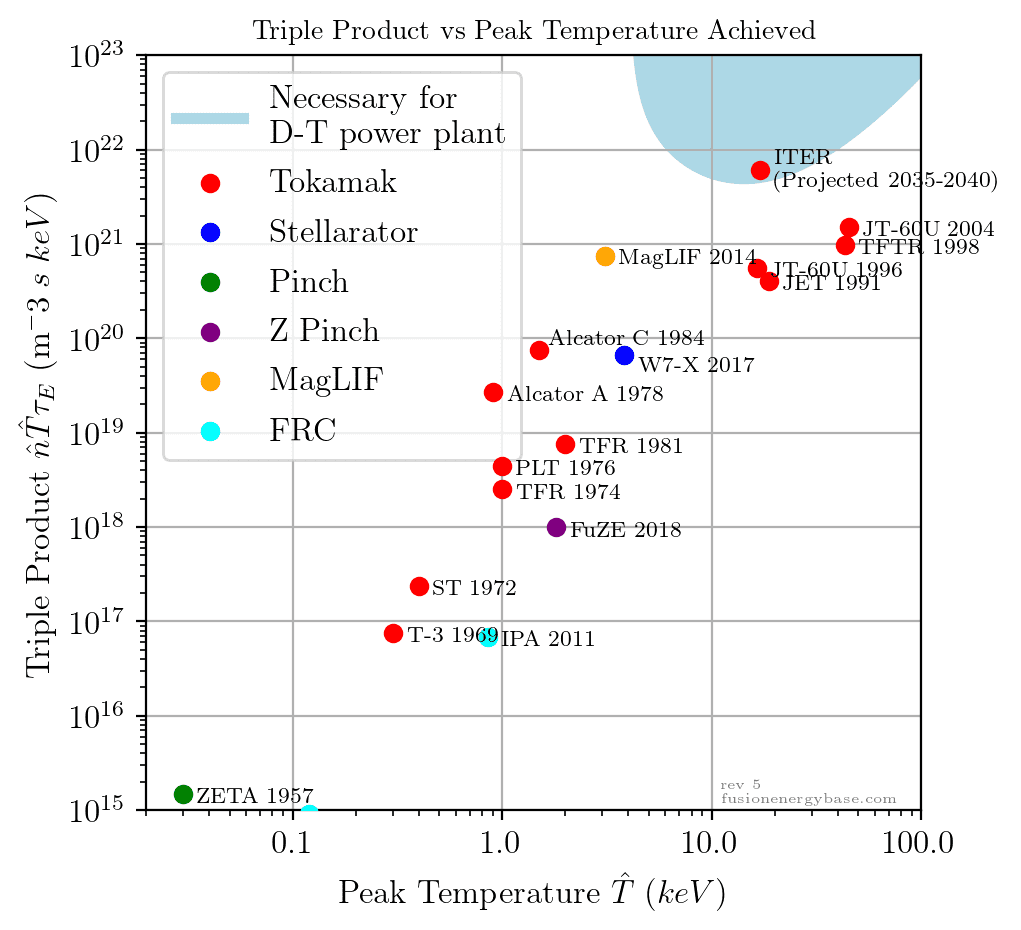 Figure 4: Achieved triple products and temperatures for selected experiments. Data from Fusion Energy Base. Additions, updates, and corrections are welcome.

###The Future: Enabling Technologies, Fusion Energy Startups, and the Funding of Alternate Concepts and Advanced Tokamaks by the US and China The exciting recent results from alternate concepts are largely due to deep scientific understanding derived from 70 years of research in plasma physics and advances in computation and simulation. Additionally, advances in material science and manufacturing are enabling a new class of advanced tokamaks and stellarators, respectively.

Today, over 25 startup companies exist with the mission of generating economically viable power from fusion. All of them leverage the accrued scientific understanding of plasma physics and one or more of these enabling technologies. Most of them did not exist five years ago.

Governments and investors are taking note. In 2015 the US Department of Energy's ARPA-E ALPHA program funded nine groups over three years to work on new fusion approaches resulting in alternate concepts hitting 1 keV ion temperatures and neutrons from D-D fusion reactions at very modest levels of funding. And as of this writing, ARPA-E just announced a follow on program, BETHE which calls out specific triple product values as project milestones.

On the private investment side, venture capitalists, public companies, banks, and angel investors have injected over a billion dollars into fusion startups over the last decade. As more private money flows into this space, it behooves investors to inform themselves not just about power plant economics but also the basics of plasma physics, fusion technology and how each company plans to economically reach power plant relevant triple products. In this way investors can most effectively allocate capital to the development of a technology with the potential to shake up the economic sector with the largest total addressable market on earth: energy.

###Notes 1: For the purposes of this article we take fusion energy to mean controlled thermonuclear fusion, fusion due to the thermal motion of ions in a controlled way with the intention of using the net power to generate electricity or industrial heat. There are other ways of generating fusion reactions which cannot generate net power (e.g., simply accelerating a beam of ions at a target) but this discussion is limited to controlled thermonuclear fusion relevant to power plants.