What is Fusion Energy?

When two light nuclei like deuterium and tritium (two isotopes of hydrogen) fuse into a heavier element like helium and a free neutron, energy is released. The energy comes from the conversion of a small fraction of the mass of the reactants (deuterium and tritium) into the kinetic energy of the products (helium and neutron). 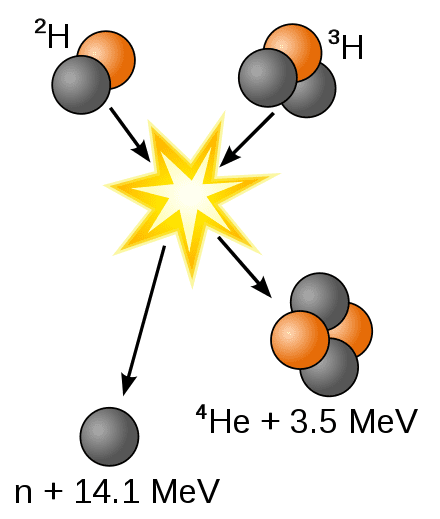 Diagram of the deuterium-tritium fusion reaction. Via Wikipedia

In a future fusion energy power plant this kinetic energy will be captured and converted into electricity.

Fusion was identified in the mid 20th century as the ideal source of energy because it has all the advantages of nuclear fission (no greenhouse gas emissions, capable of baseload power) but without the drawbacks (no risk of meltdowns, no risk of proliferation of fissionable material, and no need to dispose of large quantities of long lived radioactive waste).

###Challenges to Fusion Energy The underlying challenge to fusion is that reactants naturally repel each other because they carry positive charge and like charges repel. It's hard to get them close enough to fuse. Creating the required conditions where enough fusion reactions occur and net power is generated is a very hard problem. It has not yet been achieved and so today there are zero fusion energy power plants.

Still, physicists have made steady progress and it's likely that the goal of achieving net energy gain will be achieved in the coming years. Generating net energy is necessary but not sufficient for a power plant. Other requirements include,

1) Generation of enough output power to overcome inefficiencies in heating the fusion fuel and the conversion of the heat generated to electricity 2) Reliable operation over long periods of time. This includes managing the effects of neutrons in the case of deuterium-tritium reactions (discussed below) 3) Sufficiently low construction, operation, and decommissioning costs to ensure commercial viability 4) Appropriate regulatory frameworks 5) Social acceptance

Each of these requirements comes with its own set of challenges and each merits a separate discussion.

The net energy released in one of these fusion reaction appears as the kinetic energy of the helium and the neutron. They fly off at high speed and generate heat when they interact with their environment.

If one kilogram of deuterium and tritium is fused, 108 kWh of energy is released, the same amount of energy used by a small city in one day.

Other fusion reactions exist and have advantages and disadvantages compared with D-T. Some don't release neutrons which is a big advantage because neutrons pose difficulties in their interaction with materials: they weaken metals and can induce radioactivity in materials. One of these aneutronic (non neutron producing) reactions is the fusion of a deuterium and a helium-3 nucleus.

All of the reaction products are electrically charged which mitigates the neutron problem (though some neutrons are still generated from deuterium - deuterium side reactions). But this reaction requires higher temperatures than D-T fusion which increases the technical challenges. Also, obtaining helium-3 comes with its own set of challenges.

###Approaches to Fusion The main approach to overcome the repulsion between the positively charged nuclei is to heat and confine a hot gas of them (a plasma) to conditions where the fusion power released exceeds the power used to heat and confine.

Three1 classes of approaches are being pursued:

1) Magnetic: using magnetic fields to trap a plasma in a confined region 2) Inertial: using an inward directed push through mechanical means to compress a plasma. 3) Magneto-inertial: a combination of both magnetic and inertial approaches

###Current Status Today, teams around the world are pursuing many different approaches to fusion energy. The largest effort is the ITER project, an international collaboration building the largest tokamak (the leading magnetic fusion design) in France. It is expected to generate net energy around 2035 at a cost of over $25B. ITER is a scientific experiment to study fusion plasmas which generate net energy and the associated systems and materials required.

Other groups in universities, national laboratories, and companies are pursuing many different approaches to fusion energy. As of late there's cautious optimism as these groups apply the latest technologies from many different fields to a defining human challenge of the 21st century, developing commercially viable, baseload, safe, carbon free energy.